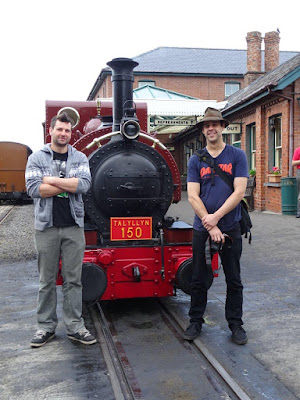 With “coincidentally” overlapping trips to the UK planned for June 2015, myself and David Clowes, Puffing Billy’s Maintenance Engineer, decided to make the most of the opportunity and planned a week visiting some of the better heritage railways within Wales and the West Midlands. The aim was to carry out a little research while we were there, not just from an engineering perspective, but from the view of a heritage tourist railway in general. 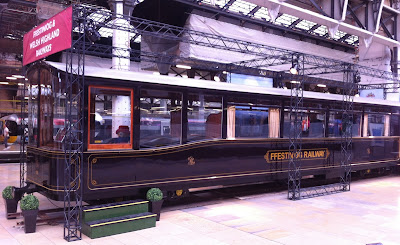 Narrow gauge steam railways are certainly not in short supply in the UK; in fact I bumped into the Ffestiniog Railways brand new observation car ‘150’ displayed on the platform at London Paddington station as I headed from the airport to catch my train. The workmanship and finish is something the FR should be proud of. (Note the cheeky red hated bear sitting in the window!). 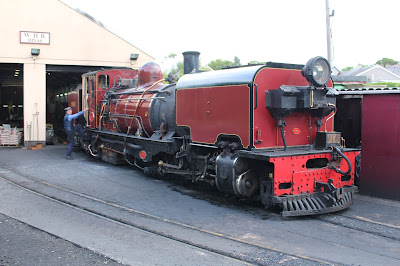 David arrived as my annual stint firing on the Welsh Highland Railway was into its last days, so with footplate pass arranged, I dragged him along to experience the NG/G16’s Garratts in operation. We had the Dinas turn; signing on at 6.30 gave us 3 hours to prepare, light, and clean the loco before going off-shed.

All the paint and brass has to be polished before going off shed, no small job when working on a Garratt. Thankfully The UK railways operate to a more traditional agenda, with the fireman responsible for the fire, the driver looks after greasing and oiling round, and everyone (Drivers, firemen and cleaners alike) are responsible for ensuring the loco is clean, paint wiped and brass polished.

With carriages collected, there is a 3 mile empty stock working to Carenarfon before the 50 mile return trip to Porthmadog begins. It’s pretty much a non-stop run, pausing just long enough to exchange tokens and take water….on this particular run a recurring knock manifested itself as a loose fireman’s side rear return crank. Our lunch break was spent at Boston Lodge while the fitters beat the problem into submission and we could make the return journey.

After knocking the fire out – made so much easier on these engines due to the rocking grate – and cleaning the ashpan, the motion is given a quick wipe down, engine is put away and we sign off by 6.30 pm. The day is no longer than a shift as Puffing Billy, but the operation is more intensive and as a fireman you have to be be on the ball every step of the way to keep yourself from getting into difficulty! 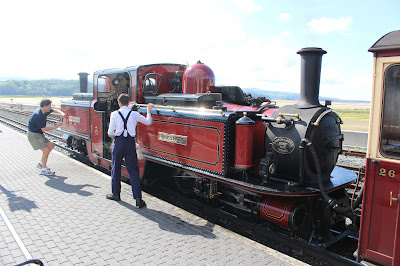 The following day, while I did my last rostered WHR firing turn, David took a ride on the Ffestiniog Railway to Blaenau Ffestiniog behind a double Farlie. Whilst not being overly complimentary about them before hand, he was certainly a convert by the time he go back to Porthmadog, having experienced the way they handle long and heavy trains with ease! 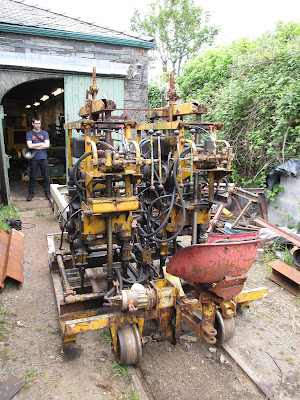 That evening we headed for Tywyn, home of Puffing Billy’s twin, the Talyllyn Railway. After an evening catching up with a PBR fireman, Zac, who now lives in Wales with his partner, we were up early for a guided tour of Pendre Works thanks to Zac, who now works full time for the TR as a fitter.

Having explored the workshops, running shed and carriage shed, we caught the empty stock working down to Wharf Station (starting point of all Talyllyn trains) where we caught up with Keith Theobald, who gave us a guided tour of the new Narrow gauge Railway Museum, including railwayana, locomotives, signalling, and even a replica of the study (complete with book collection) where the late Reverend Awdry wrote his many Thomas the Tank Engine stories. 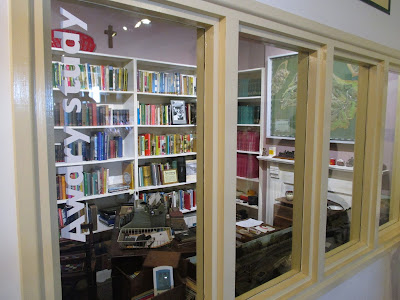 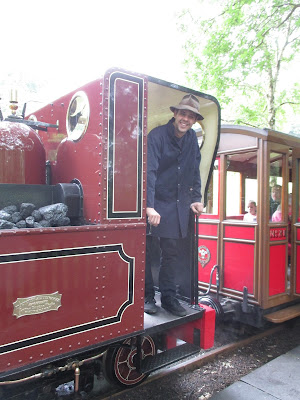 Footplate passes were filled out and, accompanied by Keith, we took it in turns to ride with the crew of No. 1, ‘Talyllyn’, fantastically turned out for the 150th anniversary of the railway which was coming up in a few weeks time. 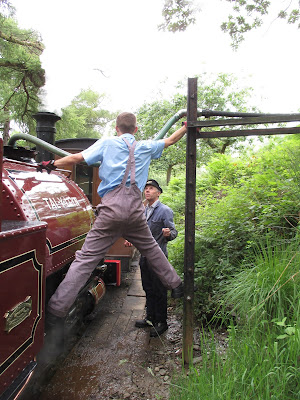 After an enjoyable morning on the footplate, and being made most welcome by fireman Alex and his driver, we arrived back at Wharf for a brief catch up with Babara Fuller (TR rostering), before saying our goodbyes and heading further still down the coast. 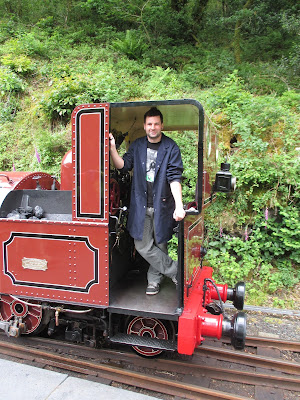 The next stop was Aberwystwyth, home of the Vale of Rheidol Railway, to catch up with a few friends and nose around their brand new workshop facility. Will Smith (V of R marketing) and Andrew ‘Ted’ Faulds (V of R workshops) have both visited PBR, and general manager Llyr Ap Iolo  is one of the drivers I have fired for on the WHR a few times; they were all looking forward to our visit and the chance to show off their railway. 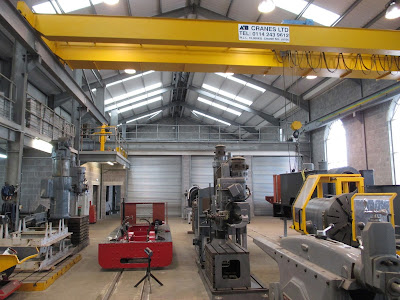 Their brand new workshop was still coming together when we visited, but it will certainly be something special when it’s complete. The facility and machine tools are part of an incentive by the railway to attract and train apprentices in restoration and maintenance of steam locomotives and other railway equipment, funded in part by a Coastal Communities development grant. 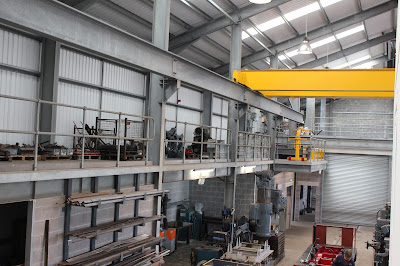 The facilities include a dedicated paint booth, drawing office, machine shops, fabrication and welding bays and a large assembly area. There is also a woodworking shop, running shed, mezzanine stores area and a public viewing gallery. 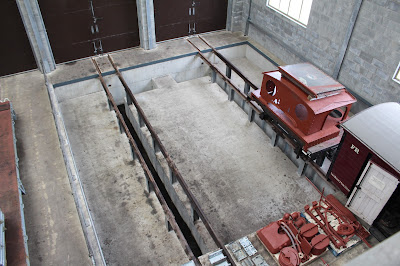 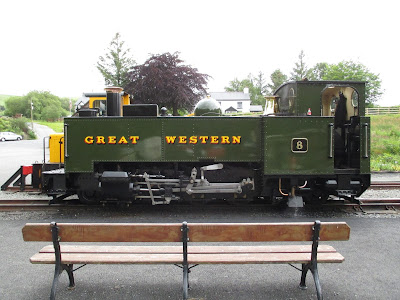 The following morning we took the train to Devils Bridge, taking turns on the footplate with driver Chris and freshly qualified fireman Niall. It was impressive to see one of these classic locos taking the grades and curves along the valley with ease. They are immaculately presented and lovingly cared for by the young staff who take a great deal of pride in their work.

The ride back to Aberystwyth in the open carriages was a good opportunity to discuss ideas and observations before leaving the Welsh coast and heading inland to Llanfair, home of the 2′ 6″ gauge Welshpool & Llanfair Railway. Held up by caravans and farmers, we had a mad scramble to get a ticket and board the final departure of the day to Welshpool. 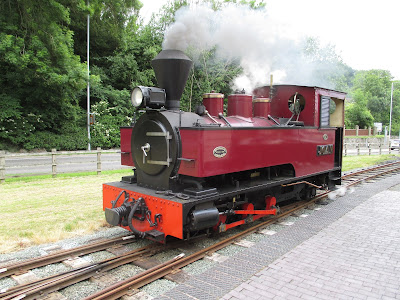 We were hauled by ‘Joan’, a Kerr Stuart of 1927 vintage which had originally been built for the cane fields of Antigua. The line follows the river along the Banwy valley, having been built to connect the farming community of Llanfair with the standard gauge network at Welshpool. Both the original locomotives and much of the rolling stock remain in service, supplemented by a variety of imported rolling stock like ‘Joan’.

After our relaxing train ride through the hills we were treated to a guided tour of the loco shed and workshops by none other than Andrew Charman, editor of Narrow Gauge World, before heading back into England. 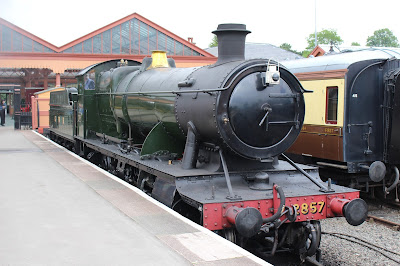 Next was a day out at the Severn Valley Railway and the chance to catch up with more friends. Arriving at Kidderminster we were greeted by Phil Brown, Operations Manager, who showed us around, including a tour of the somewhat impressive signal box! 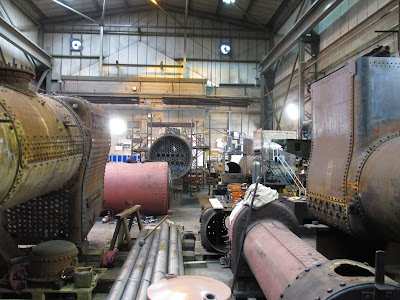 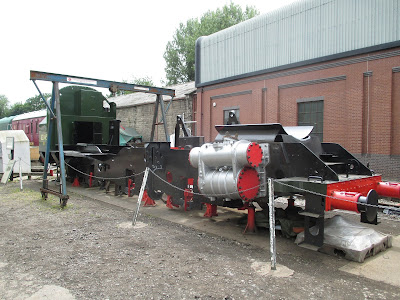 After a ride along the line, including beer service to our compartment, we caught up with Bob Heath at Bridgenorth. Bob is a Puffing Billy Fireman, making the trip over for several months every year, and volunteers on the SVR when he’s at home in the UK. 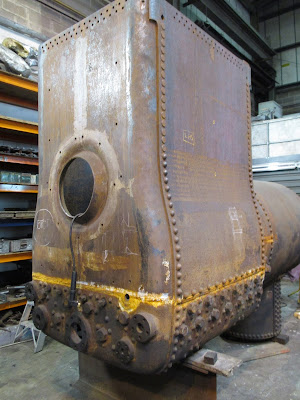 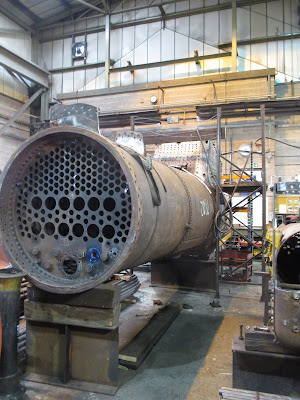 Bob kindly took time out to show us around the railways engineering headquarters, including locomotive workshops and boiler shop. The Bridgenorth facilities restore and maintain not only the railways locomotives and privately owned resident locomotives too, but carry out repairs, restoration and boiler work under contract for other railways.

The photos give a good idea of the size of the facilities and the range of work being carried out, all to a very high standard. 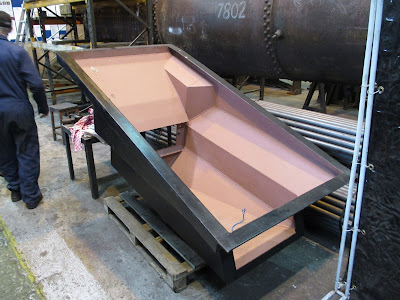 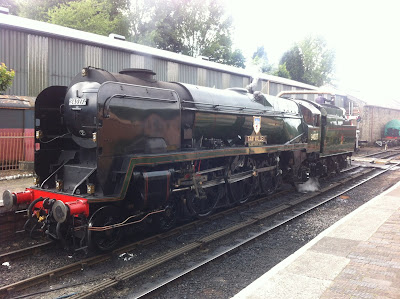 Following the tour, Bob very kindly arranged for us to travel back to Kidderminster on the footplate of ‘Taw Valley’, a Bullied West Country class locomotive. My first cab ride on a standard loco, the scale is impressive compared to what we are used to at Puffing Billy, although sadly the speed limits meant the crew weren’t really able to stretch its legs. 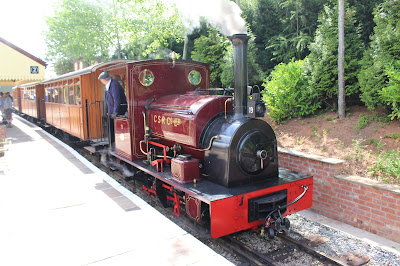 Our final visit was to the Statfold Barn railway in Tamworth. Here the builders drawings for a number of prolific British locomotive manufacturers are housed, including Hunslet, Hudswell Clarke and Manning Wardle.

I had arranged to collect some drawings for  Hudswell Clark No. 4, one of the Menzies Creek museum locomotives, and the day happened to coincide with the SBR’s family day. The event, put on by the owner of Statfold Barn Farm, Graham Lee, is a thankyou to the employees and volunteers that run the farm and railway, including the locomotive restoration business. 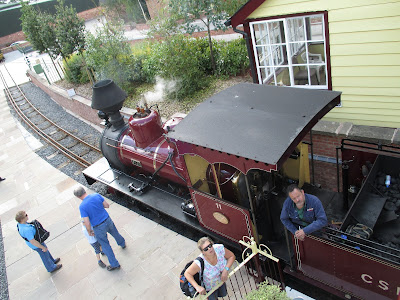 Parking at the main farm, we took the train which skirted the crops until it reached the grain store. Outside there was food stands, traction engines, trucks and vintage farm and construction machinery, including a recently restored steam excavator.
The main focus of the visit however, is what lies inside…. 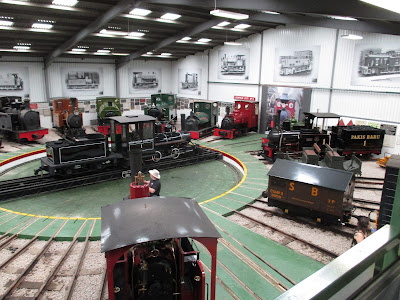 No longer used for what the name implies, this huge building is now a display shed for the locomotives and rolling stock both restored and awaiting restoration.
Radiating from a turntable in the centre, tracks covering the floor of the entire building hold a fascinating array of both British and internationally build locomotives which have been rescued from all the world. 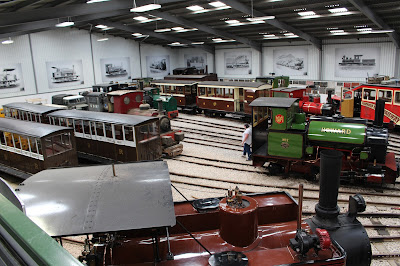 As well as a huge archive of drawings, builders order books and photographs, Graham Lee also owns the name and rights to the Hunslet Engine Company. Under this name, the SBR have manufactured three brand new steam locomotives, including 2 to the ubiquitous ‘Quarry Hunslet’ design, ‘Statfold’ and ‘Jack Lane’ (below). I’m told there are enough parts for at least one more in stock, and if you are interested, the price isn’t completely out of this world! 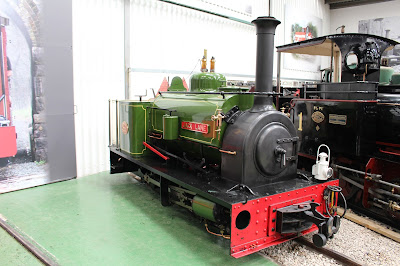