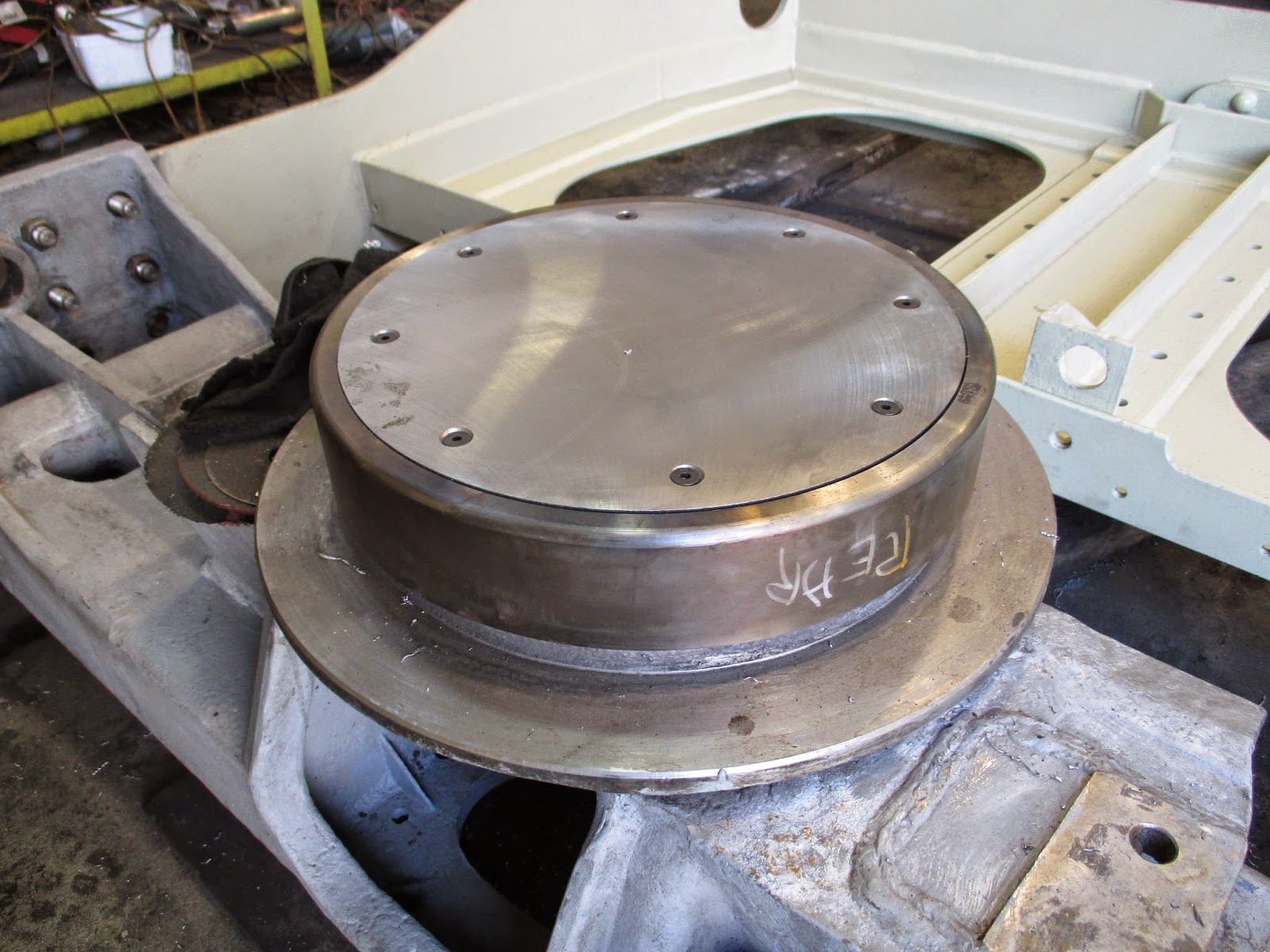 With the boiler progressing at the contractors, focus in the workshop is on getting the boiler cradle unit ready to accept the boiler when it arrives. The aim is to have the boiler cradle to a stage where the boiler can be trial fitted, removed for cladding, and refitted for a final time with no outstanding work requiring its removal.
One of the jobs on the list is the fitting of the tyres and liners to the boiler cradle pivot centers, which has to be carried out with the cradle upside down. The original worn parts had been removed, and the photos above and below show the new tyres which were shrink fitted, followed by the wear liner plates, machined to the correct thickness and affixed with countersunk setscrews. 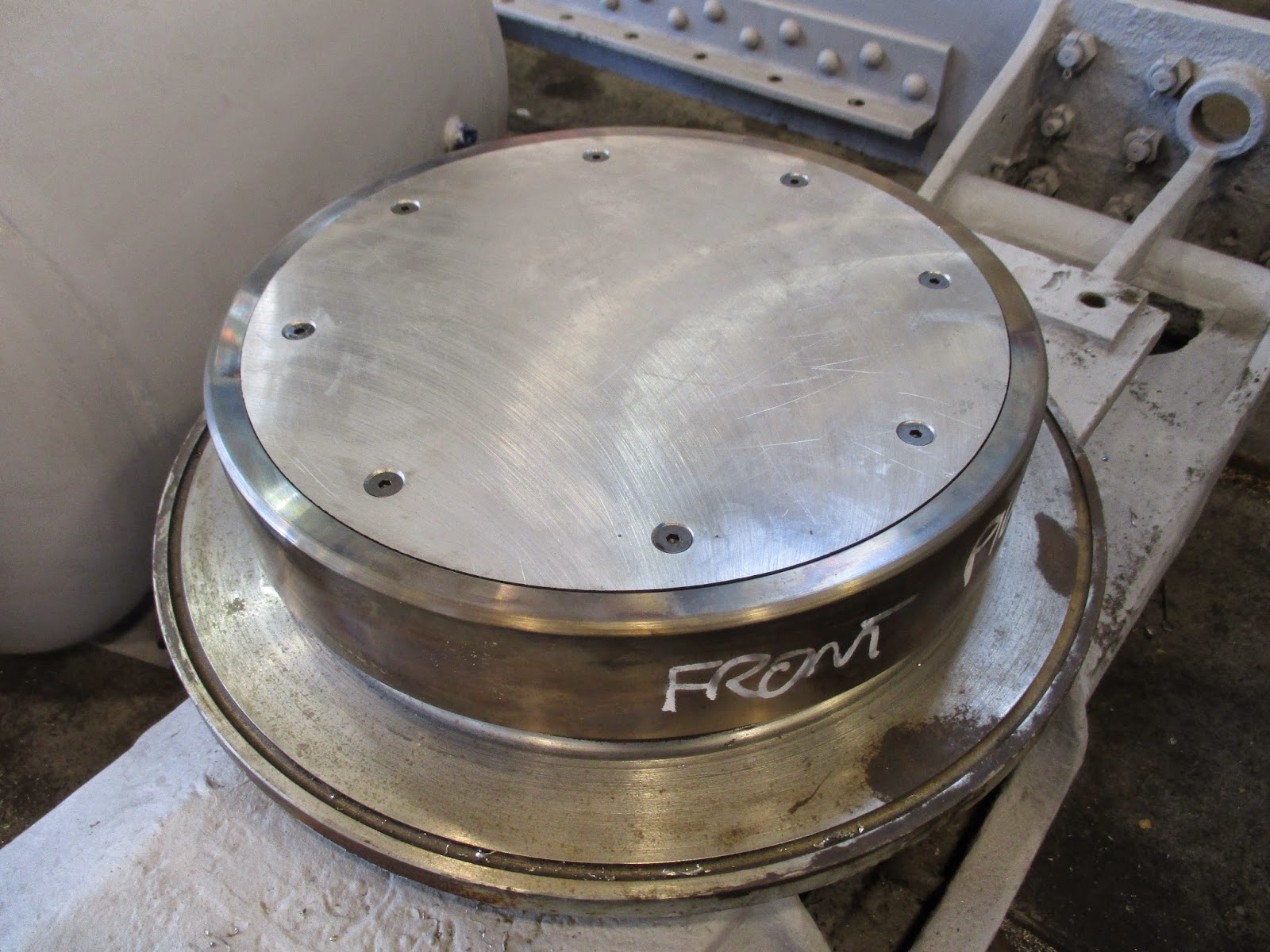 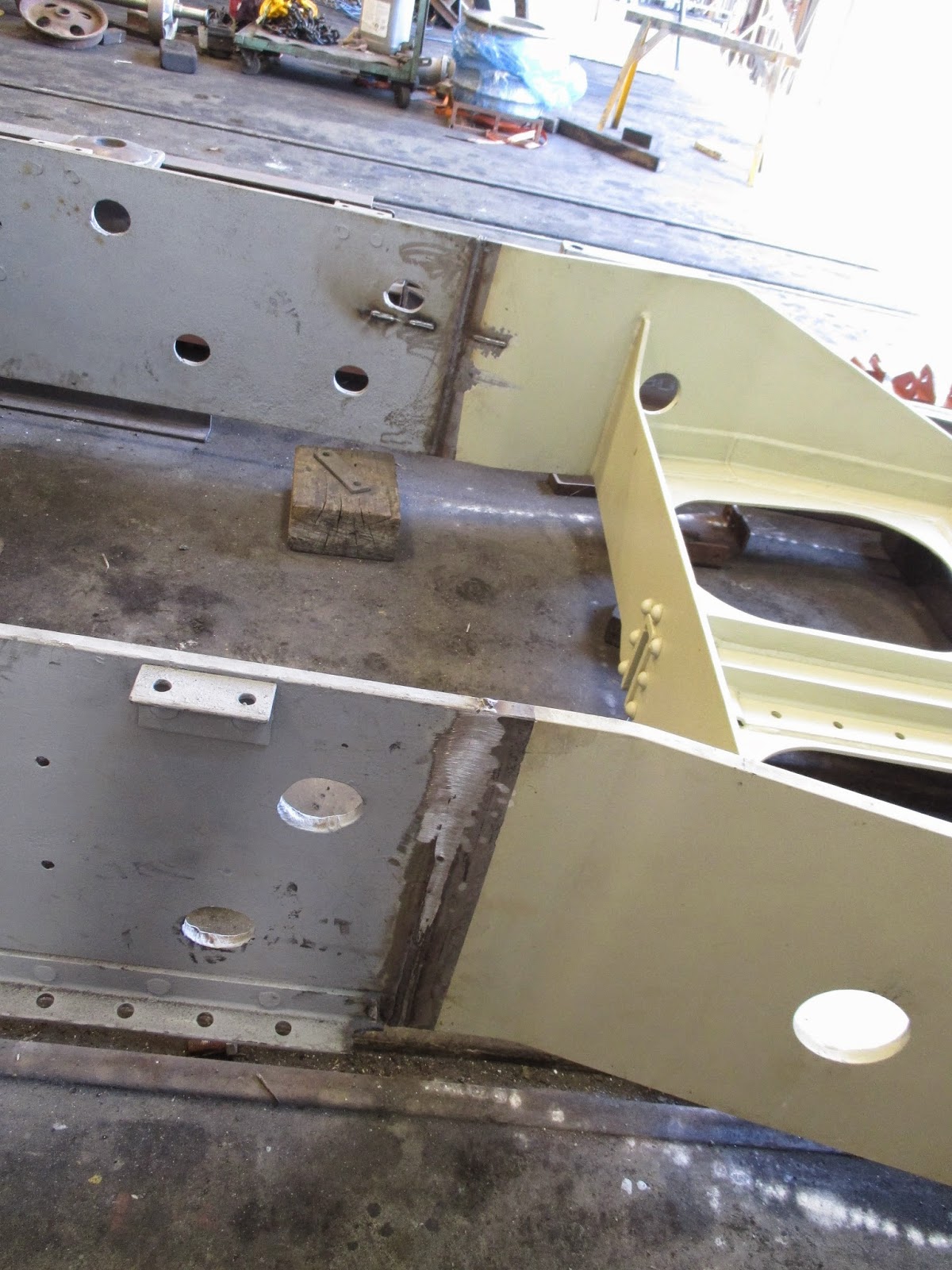 Perhaps the biggest task to be undertaken on the boiler cradle was the replacement of the complete rear end section. In the photos (above and below) the original frame is shown in grey, whilst the new section is painted green.
The original cradle was flared in the same way, but further towards the rear. With the re-gauged engine units in place, the pony truck which resides under this part of the cradle will become wider, and would have fouled on the original frame, hence the flare is being moved further towards the front of the frame to create more clearance.
The first stage was to cut away  the old part and clean the frame ends up ready for welding. As well as keeping the frame square, the critical challenge was maintaining the correct center distance between the front and rear bogie pivots.
Here the new part has been partially welded in place, with the horizontal welds marking where the temporary alignment plates had been located. 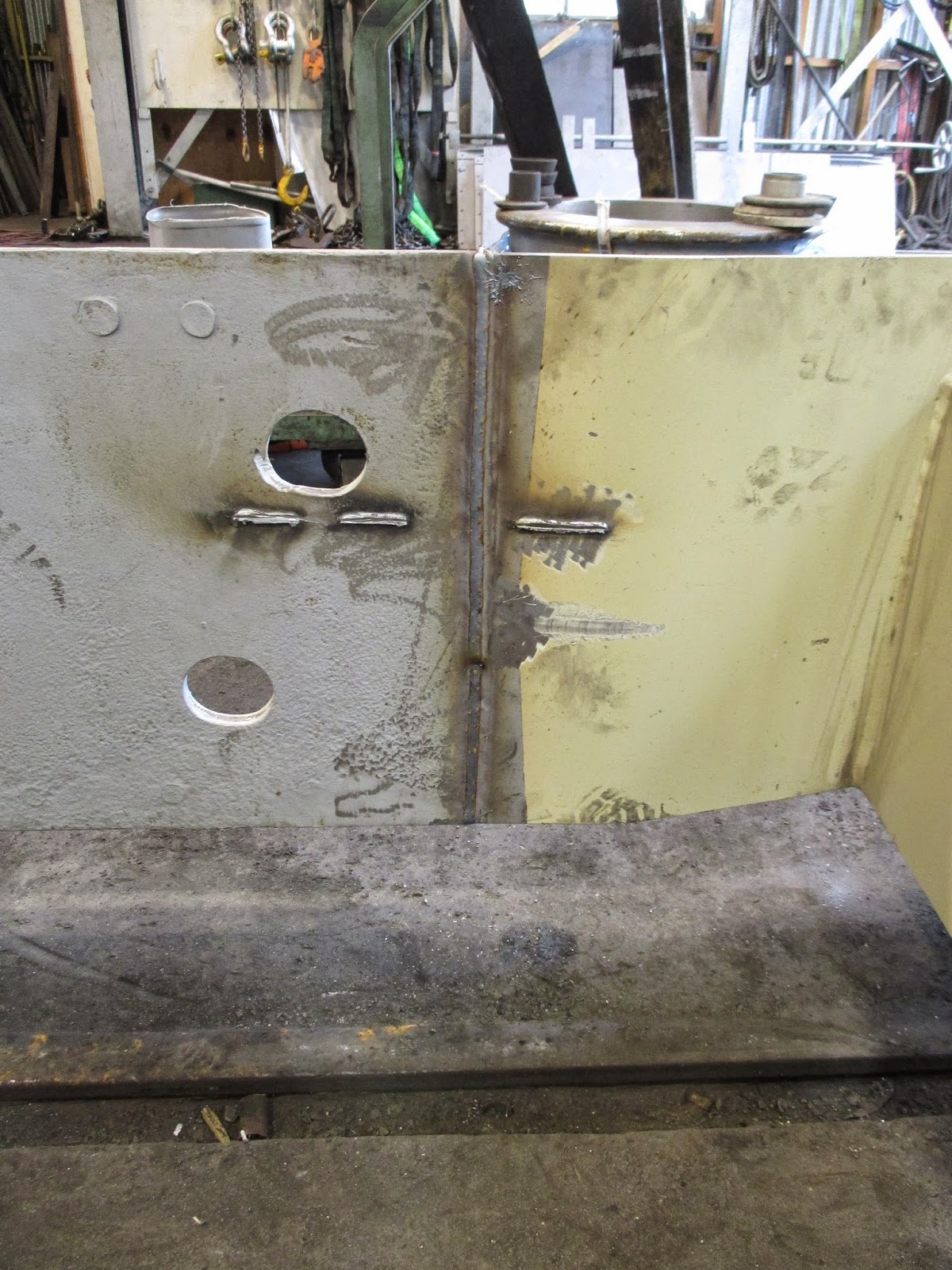 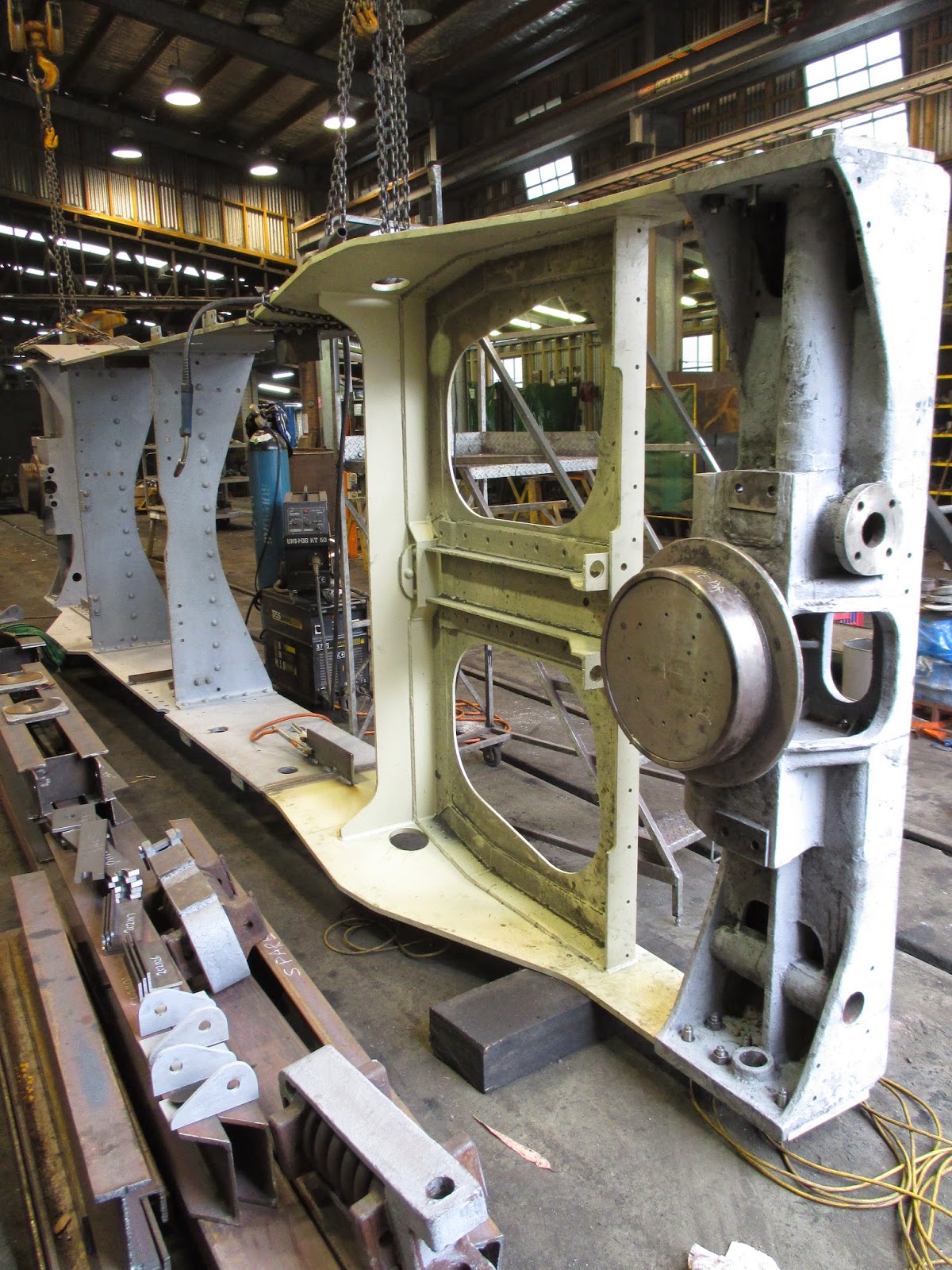 With the new rear end partially welded in place, the cradle was repositioned as required to allow full welds to be run on both sides of each plate. These welds will undergo full ‘Non Destructive Testing’ (NDT) to ensure that there are no faults in the welding which could lead to failure in service. In certain conditions the full weight of the train being pulled by the engine may be transmitted through the boiler cradle so it is imperative the weld is to full strength.
In these photos, one of the alignment plates can still be seen temporarily welded in place. 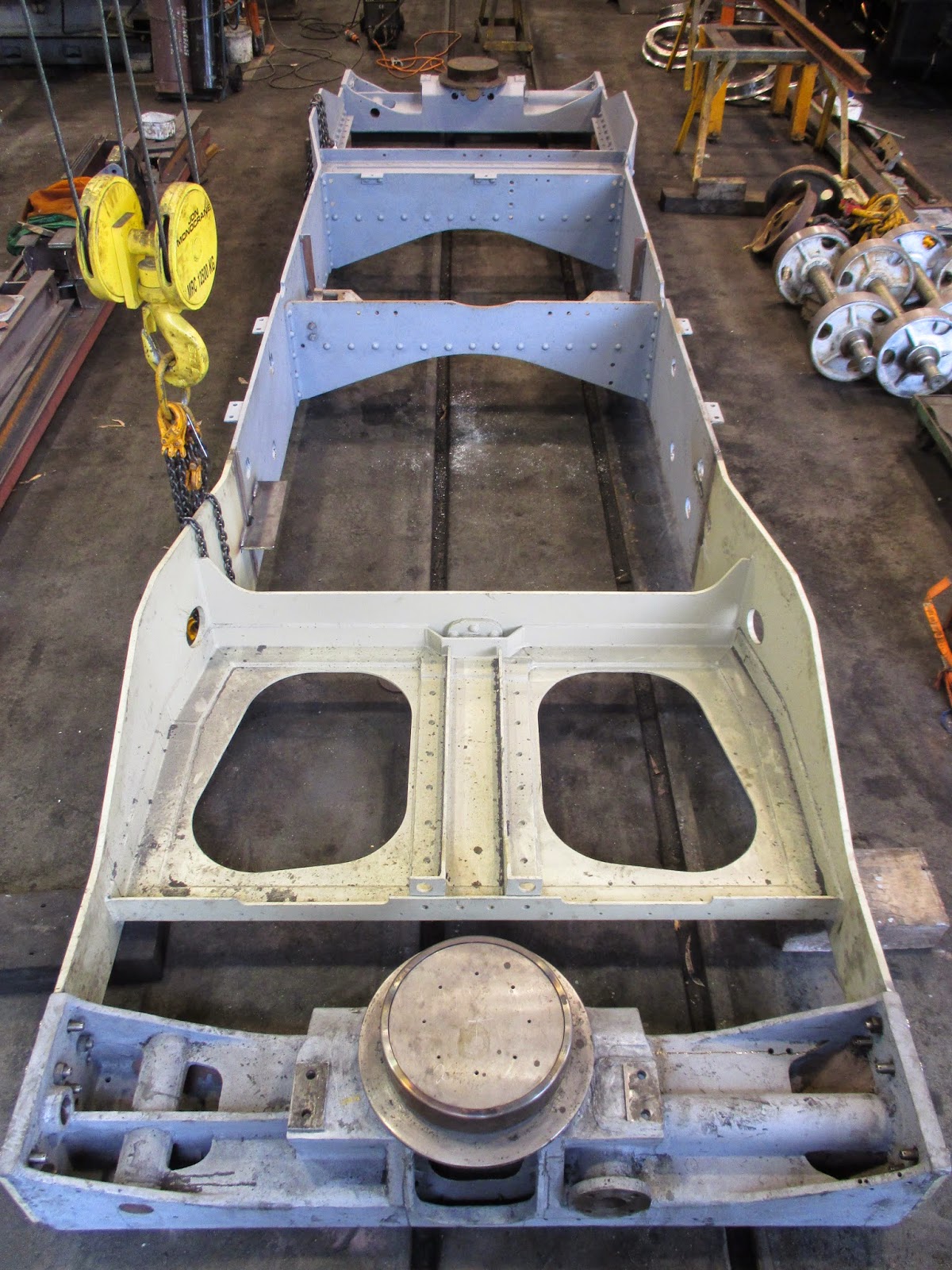 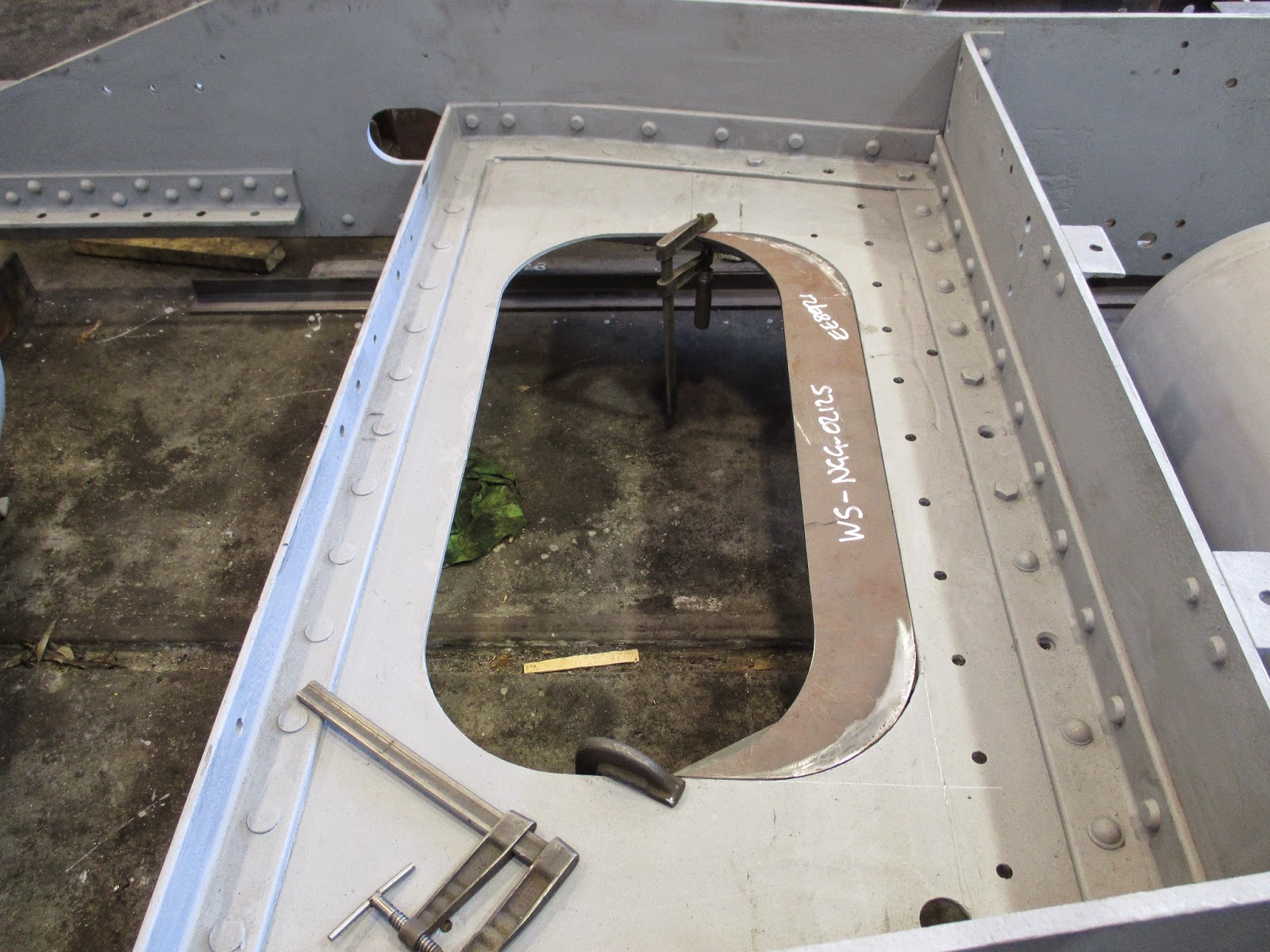 In the above photo, a filler piece is being welded into one of the existing stretcher cut outs. The stretcher was modified as part of the re-gauging, and will be used to support some of the air reservoirs for the Westinghouse air brake system, so the filler will be required to provide a larger mounting surface.
Below, holes are being opened out to accept the fitted bolts required to hold the tie rod bracket in place, providing bracing between the center of the pivot stretcher castings and the cradle frame. 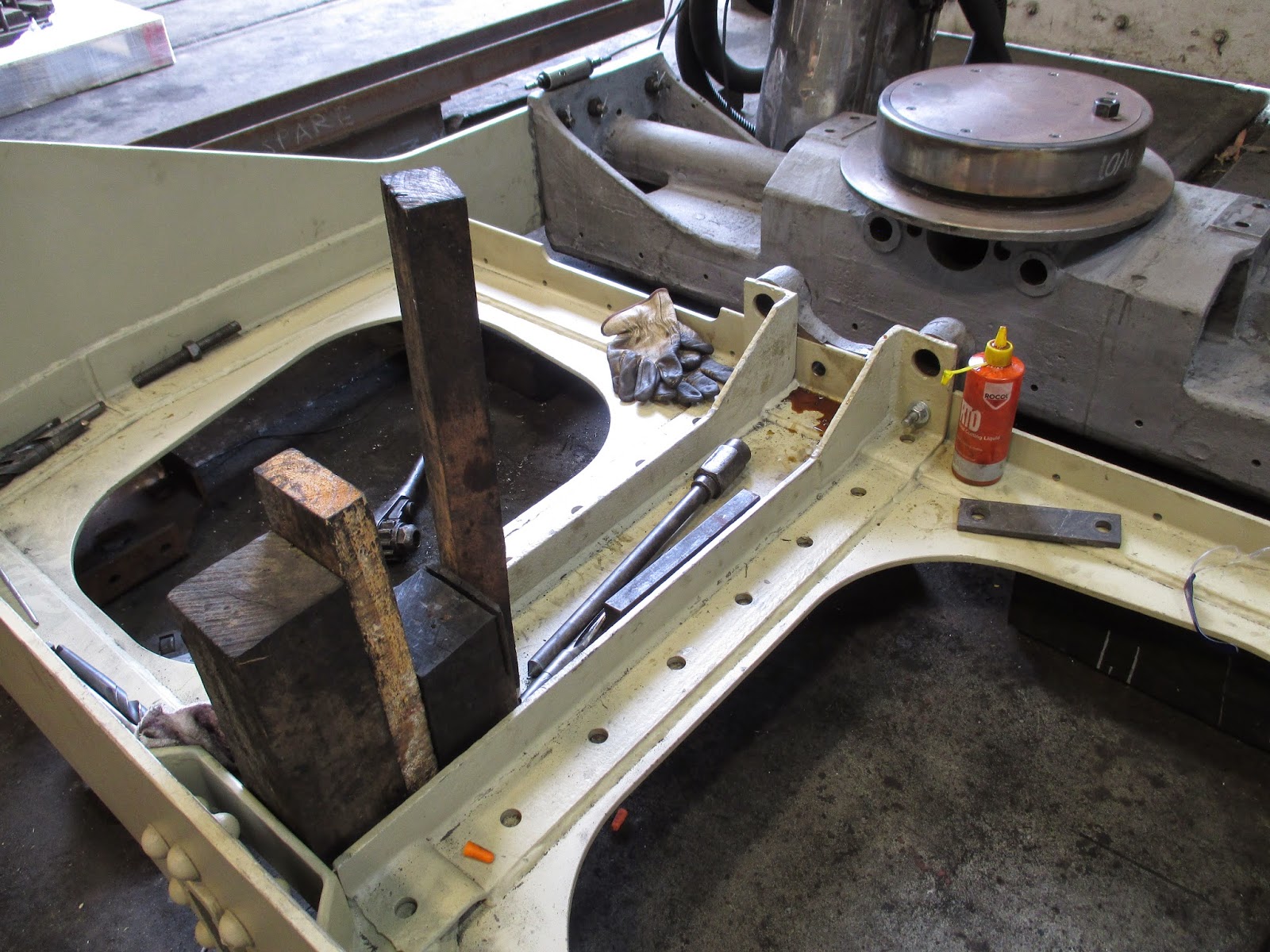 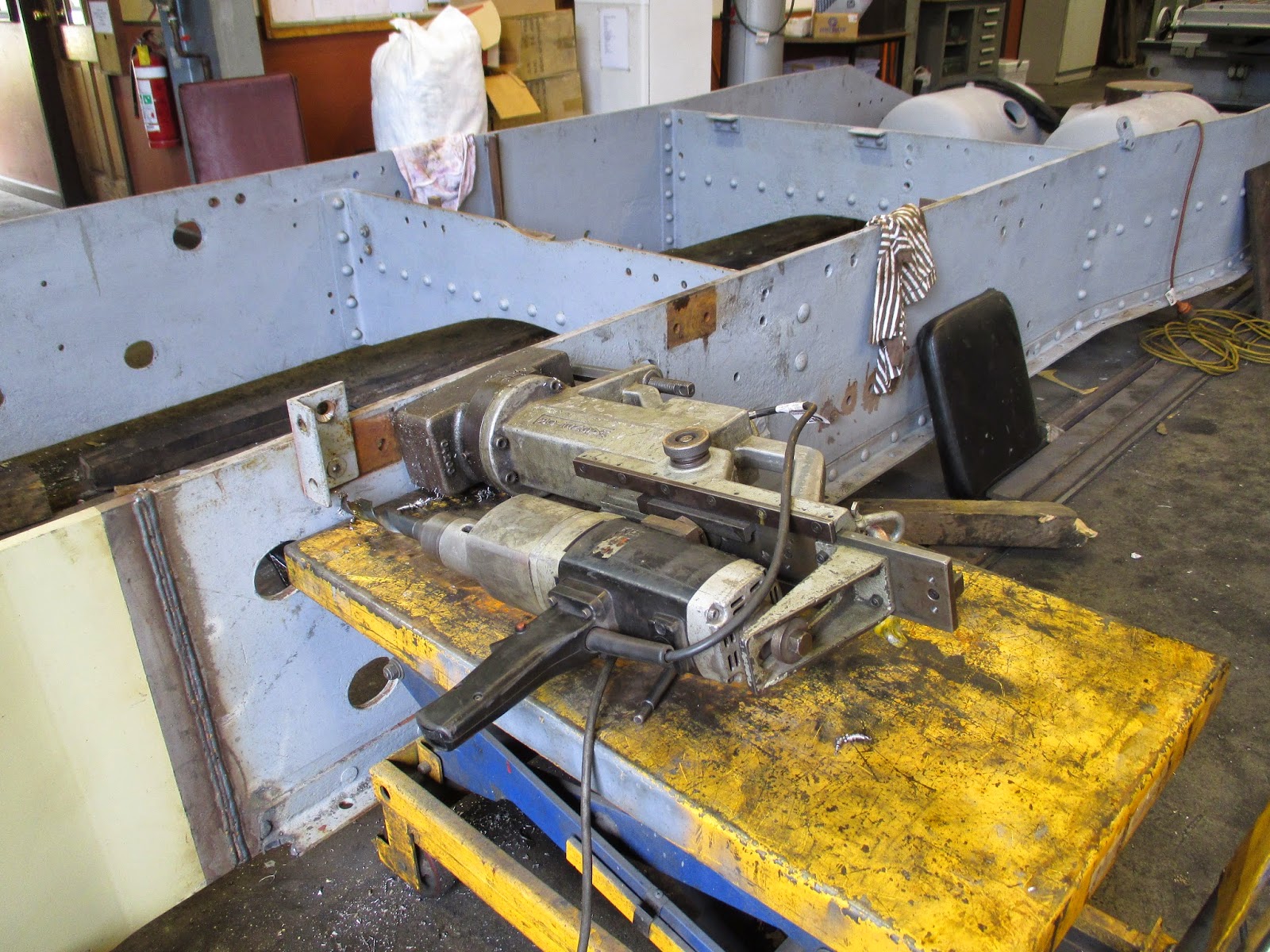 The final two shots show drilling out the rivets which hold the ashpan mounting brackets in place (above), and re-drilling the smokebox front plate mounting holes. The lower portion of the plate was replaced due to corrosion, requiring new holes to be drilled for mounting to the angle ring in the front of the smokebox itself.
The ashpan brackets are being removed as the new ashpan will be secured to the foundation ring, as with all other Puffing Billy locomotives. This ensures that if the boiler moves within the boiler cradle, gaps which may emit sparks cannot open up, a flaw in the original design. 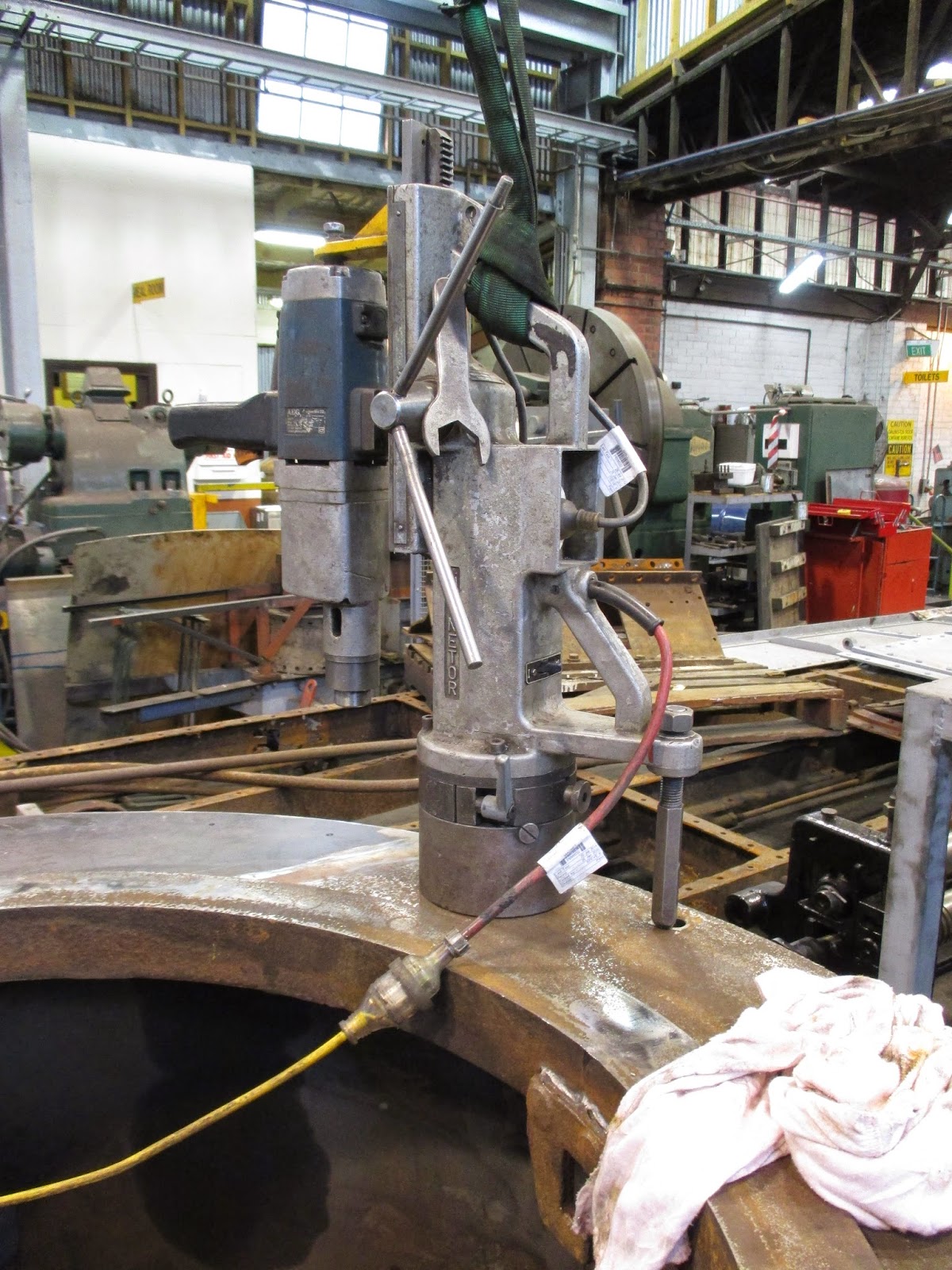