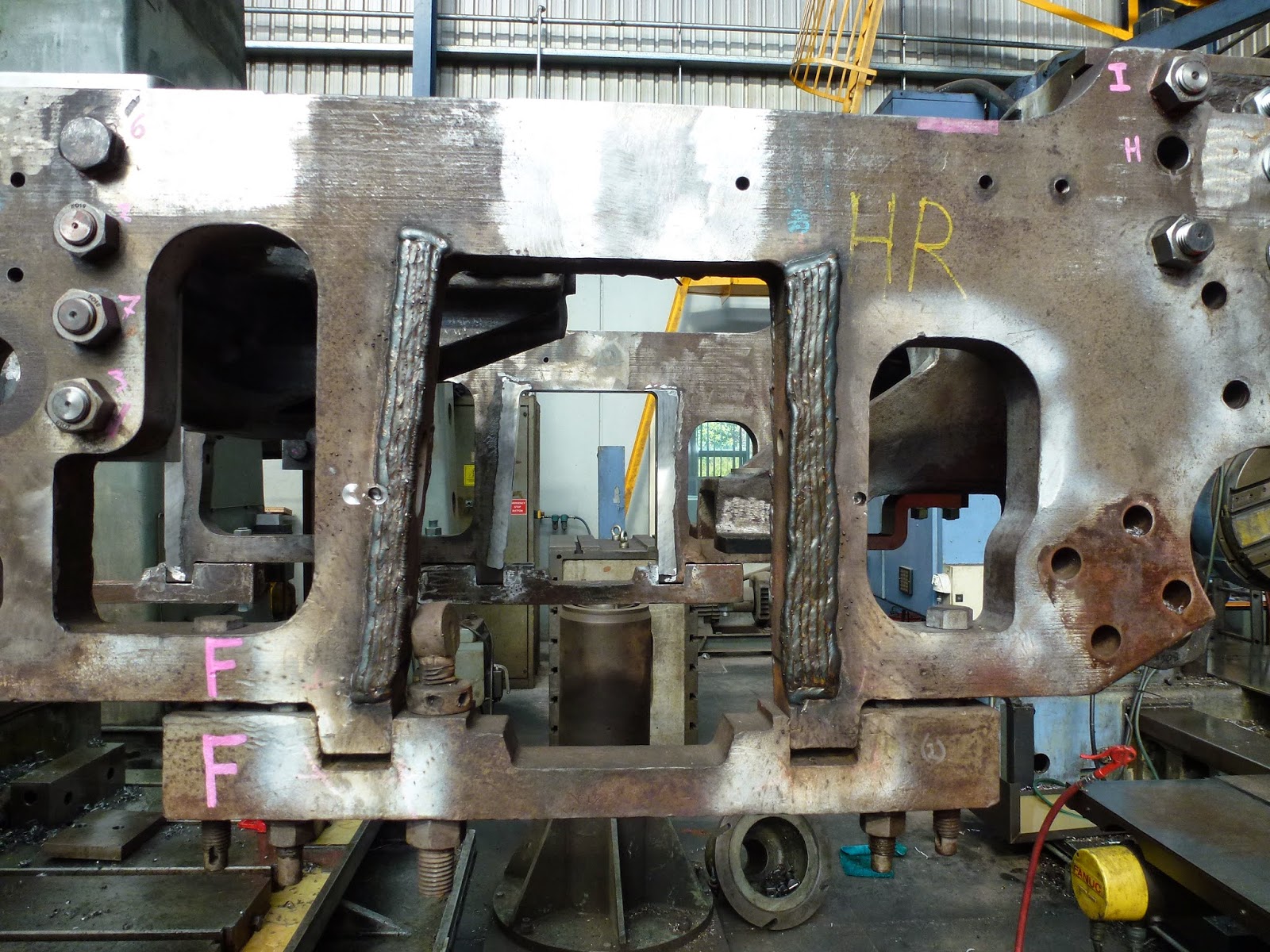 Work continues apace at Jack Thompson Engineering, with the engine unit frames undergoing final assembly and machining. This involves clamping all the parts in position while the holes are bored to size, ready to accept the fitted bolts which will hold everything together. Once aligned, final machining of worn faces can take place. This is particularly important around the axlebox cut outs, where the action of loose axlebox slippers & wedges wears the frame faces. Above you can see these areas have been built up with weld, prior to re-machining everything back to the original size (below). 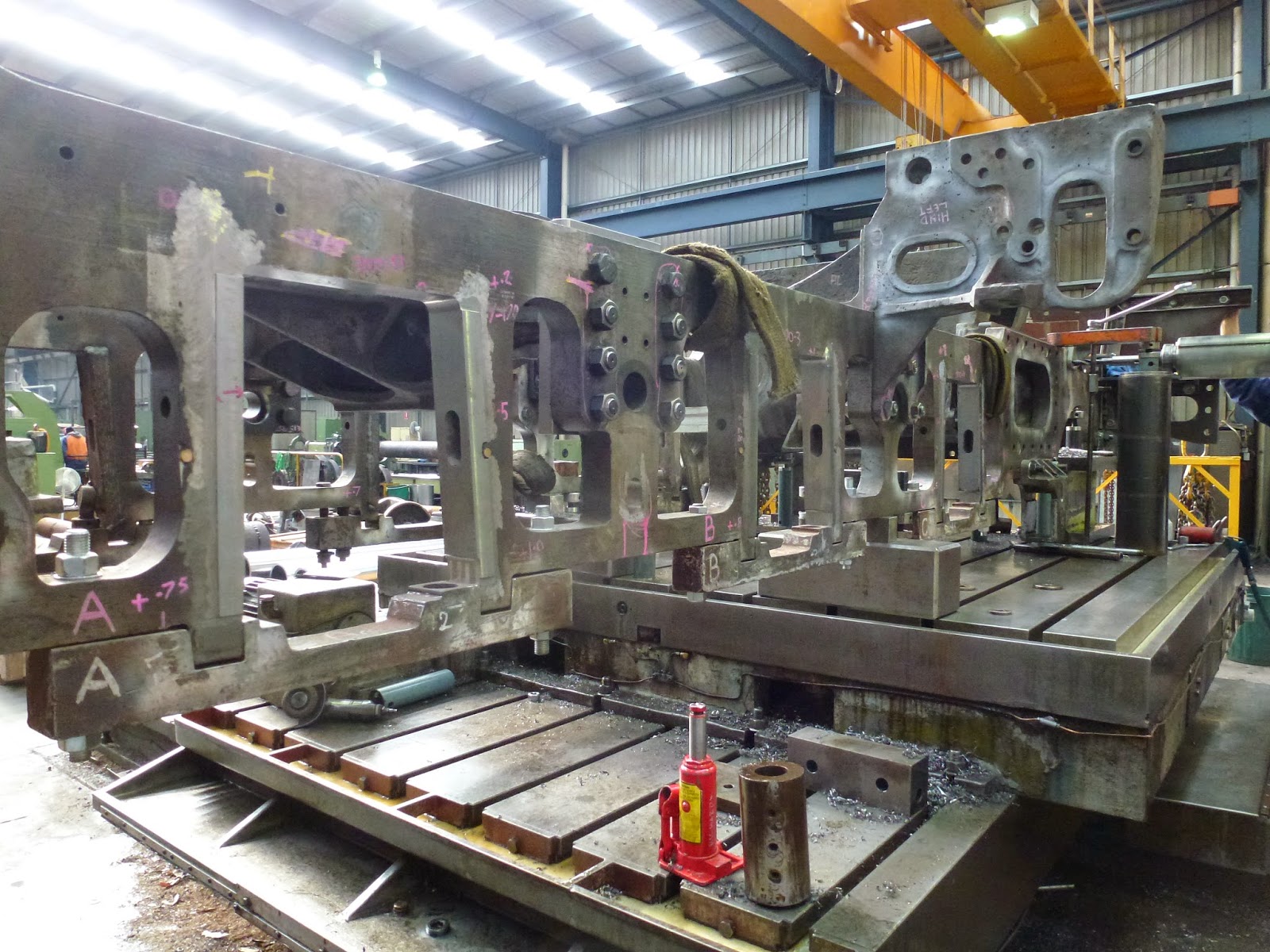 The following photograph shows where the cylinders bolt to the mainframes. You can see where the large countersunk screws have been fitted, holding the large frame stretcher in place behind, and, just visible between the frame and the stretcher casting is the 3″ spacer piece, added to facilitate the regauging of the Garratt. Also visible, brackets for the outer bogie compensating beam (below the cylinder cut out) and for the draincock linkage (on top of the frame) have been trial fitted for alignment. 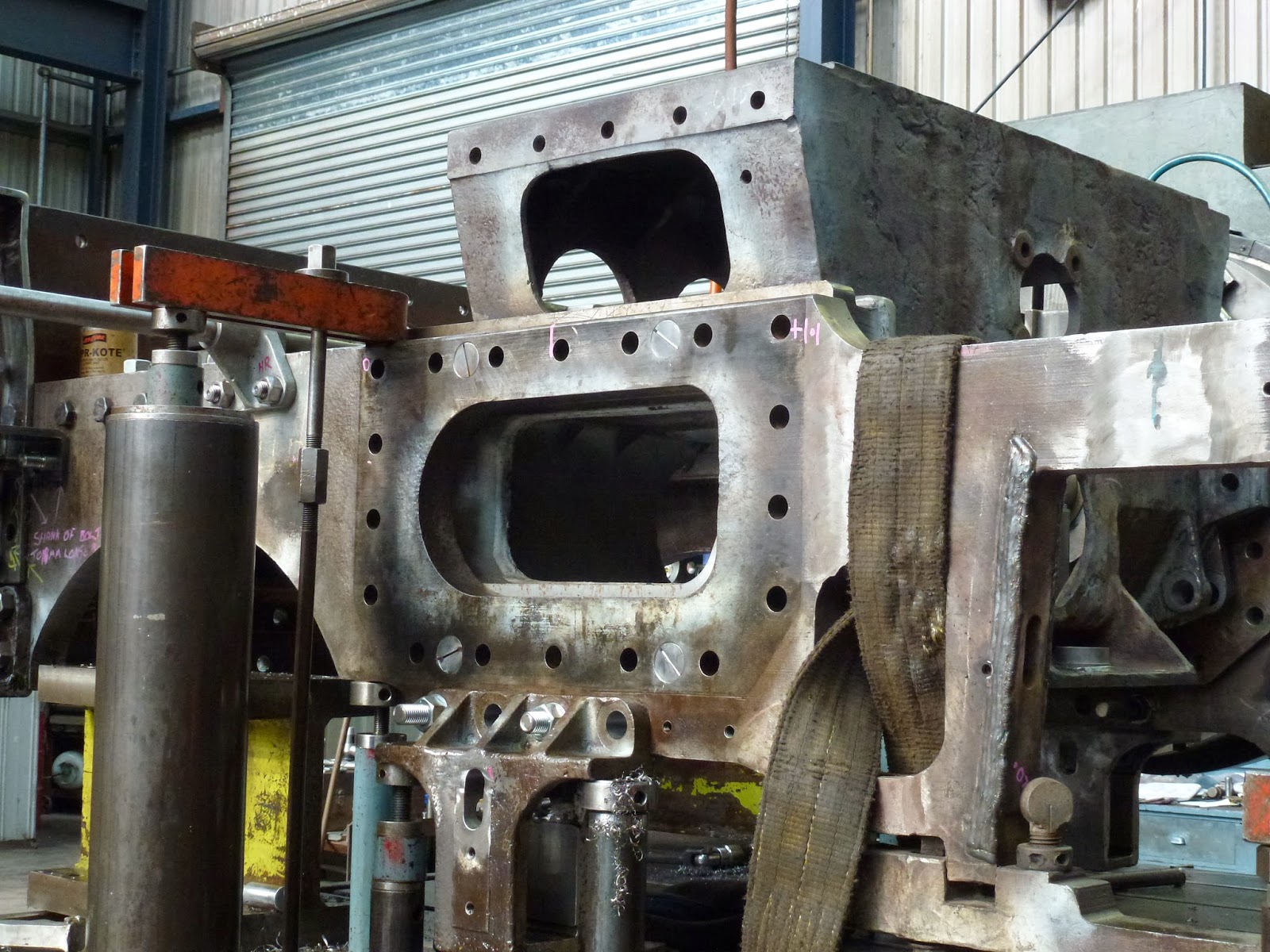 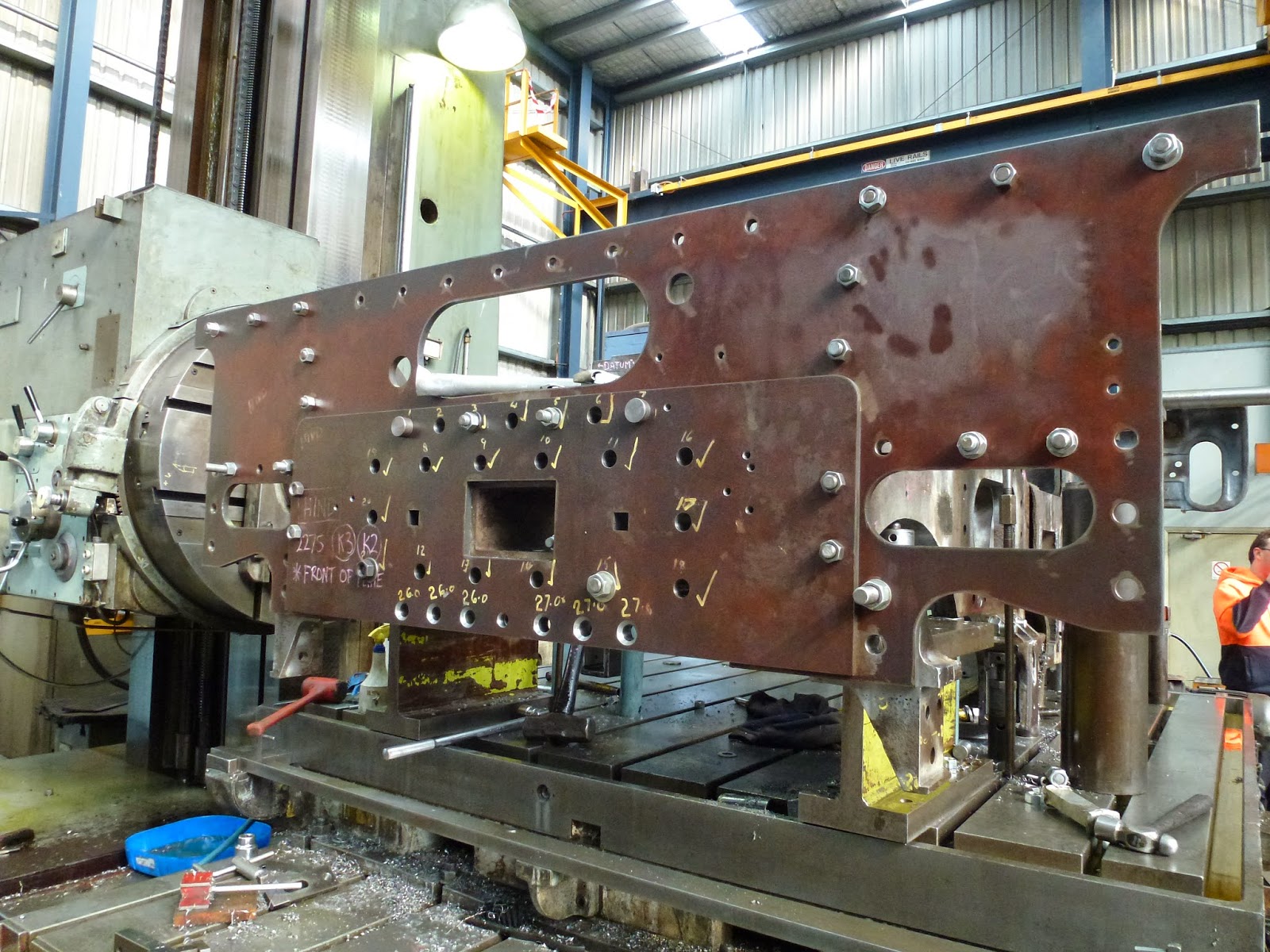 Brand new, wider headstocks (or Buffer Beams as Beyer Peacock would have called them!) have been fitted to the outer end of each engine unit, and above, one has been temporarily bolted in place while the remaining holes are bored to size. The cutout for the drawbar remains the same, and new couplers will be made which utilise the existing dragbox and drawgear arrangement. 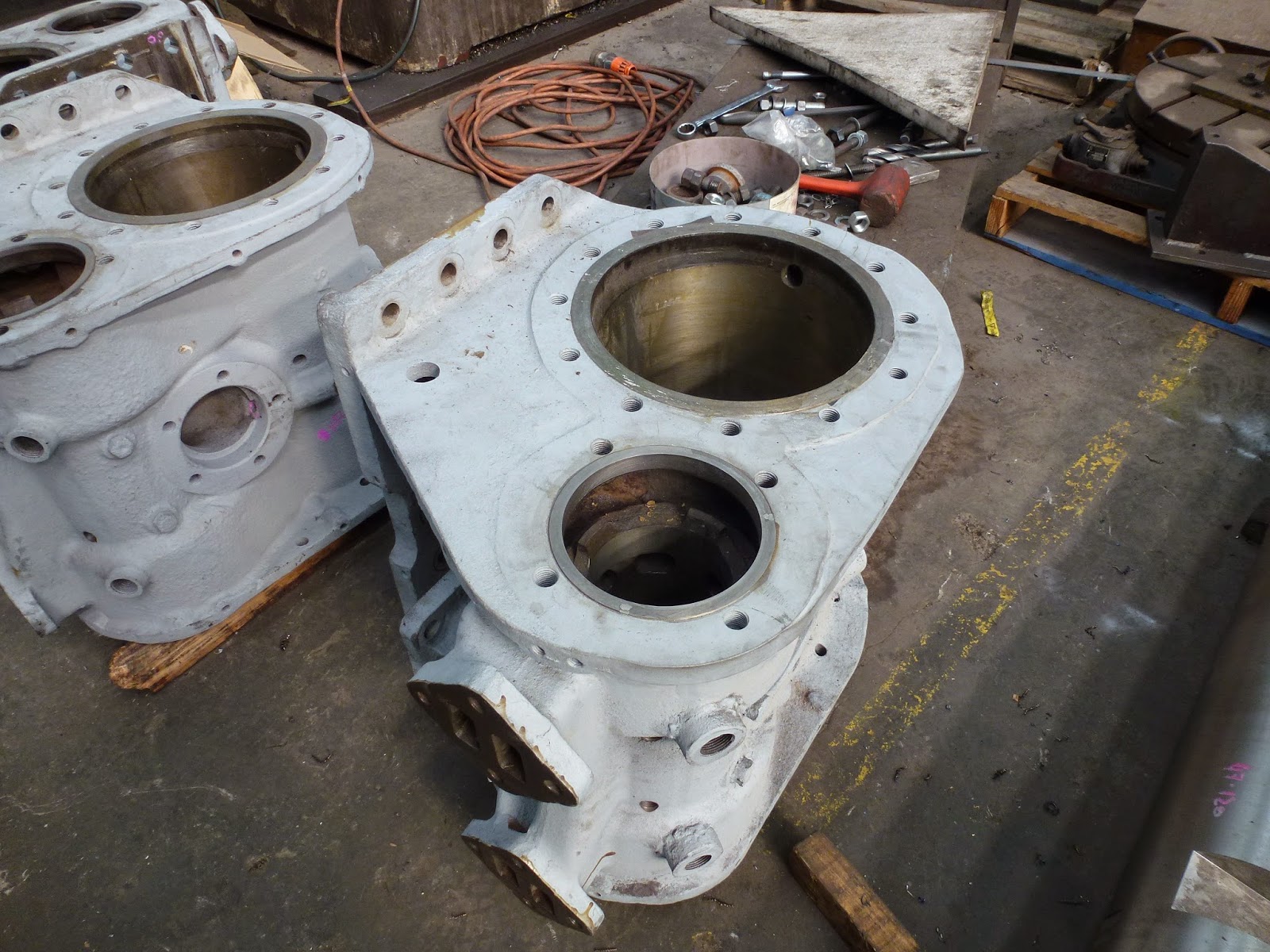 The cylinder blocks have been checked and bored for the fitting of new liners. At the same time we took the opportunity to add new lubrication line tappings, feeding directly into the valve chest bores. This ensures the lubrication ends up exactly where it is required to be most effective, and was first added to the NG/G16 class Garratts by Phil Girdlestone when he was rebuilding NG/G16 141 for Alfred County Railway in South Africa. Phil was the ACR’s Chief Mechanical Engineer, and rebuilt 141 – nicknamed ‘Red Dragon’ – as the first of the NG/G16A class, incorporating many improvements to aid fuel economy and reliablility. Below, the two smaller oil feed tappings can be seen in one of the cylinder blocks. 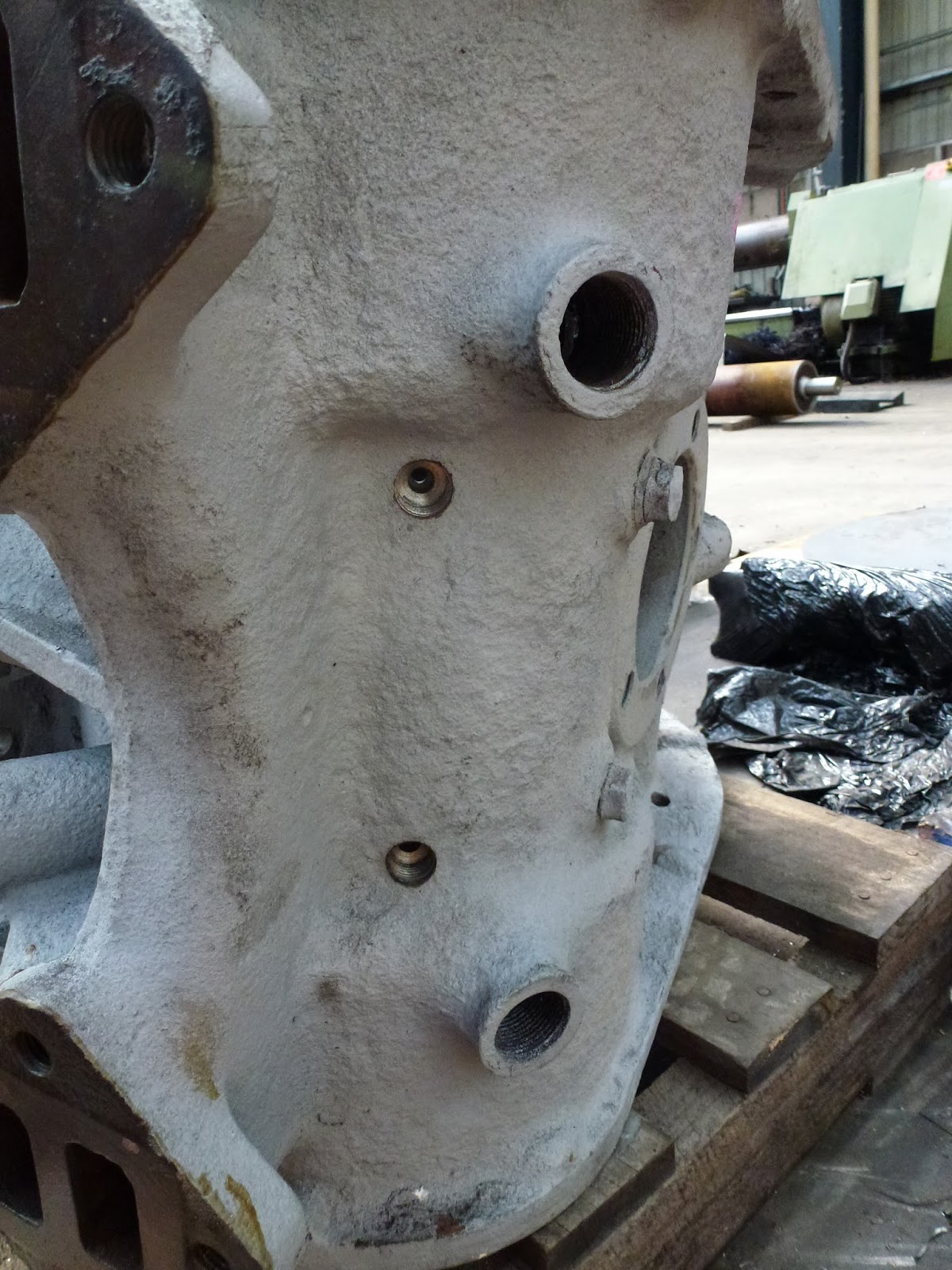