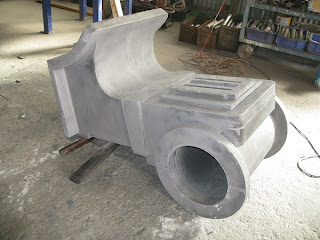 After a lengthy design process, and a complicated pattern making exercise, the first new Na locomotive cylinder castings have been delivered. Cast in South Australia, they will be used to replace the exisiting cylinders on all the locomotives, as they become life expired.

Still in use after over 100 years, the current cylinders are beginning to show their age, with worn port faces, corrosion on the mating face where the 2 halves are joined together, enlarged mounting holes caused by movement in the frames, and excessive corrosion of the steam and exhaust pipe flanges. 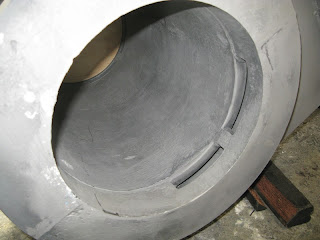 The new cylinders have been designed to have replaceable liners, port faces and steam pipe flanges, allowing all the wearing surfaces to be renewed as required. The shape of the steam & exhaust ports have been improved, making them square to the path of the valve; the aim of this is to make accurate valve setting more achievable. 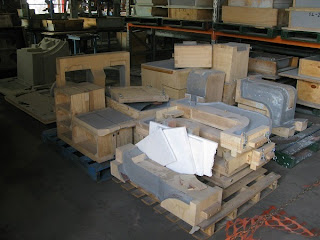 The huge number of wooden patterns and core boxes needed to make this one casting can be seen in the photo above, and gives some idea of the complexity involved. Creating the sand mould and cores from all these patterns can take up to a week, before the metal can be poured.

The first casting has been delievered to a local engineering company, who are planning to start the machining process very soon, and we hope to be fitting the first set of cylinders in 2014.