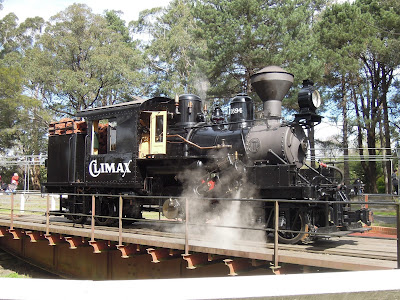 Sunday 8th September 2013: Climax 1694 returns to revenue earning traffic, exactly 85 years after entering service with the Forests Commission of Victoria. After a 10 year overhaul, including a full engineering analysis and redesign of the truck axles to prevent the fractures that had hampered its entire working life, the locomotive is seen (above) on the turntable at Emerald after hauling the special train from Belgrave. The crew for this inaugural trip (below) were Adam Black & Graeme Daniel (Loco Operations Supervisor). 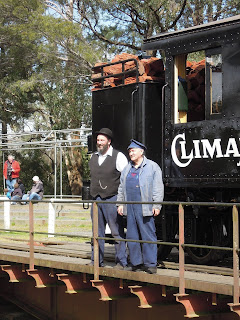 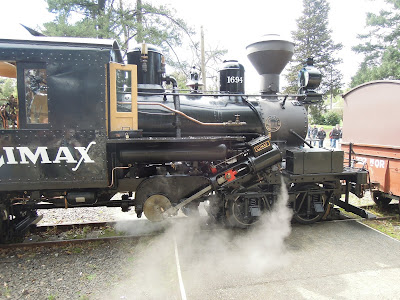 The typical drive arrangement which defines the Climax Patent can be seen above, with steeply inclined cylinders driving an intermediate crank shaft. The eccentrics for the inside Stephensons Valvegear are also mounted to this crankshaft, driving the outside slide valves through a rocker arrangement just above the crosshead. The drive is then transferred via bevel gears to a longitudinal driveshaft, located along the centre line of the locomotive.

Below you can see the drive shaft running forward to the front Truck, where futher bevel gear sets transfer the drive to the axles – an identical arrangement drives the axles of the rear truck.

This photo also highlights how these machines were designed to be rugged and reliable, but not necessarily operator friendly! Lubrication of the Bevel gear sets and slip joints require the crew to climb underneath the locomotive, between the frames, in order to reach everything…..a tough job for even the more agile of firemen! 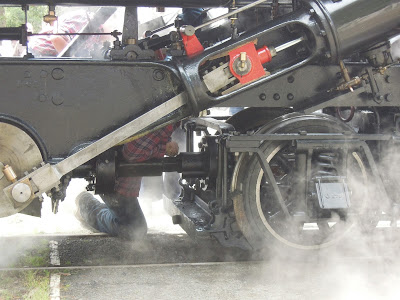