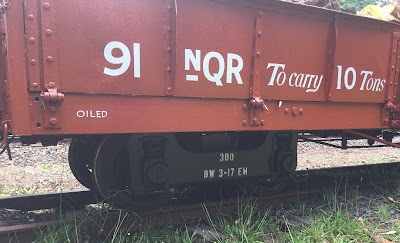 What, you may wonder, is the next step in the development of the new Fox bogie? The answer is easy; testing and more testing!

Shortly after completion, the new bogie was transferred to the carriage workshops at Emerald, where it had the body of 91 NQR attached. Following some shunting around Emerald yard – backwards and forwards though curves, grades and points – the wagon was transferred to Menzies Creek.

On the 2nd of April, 91 NQR worked its first train when it formed part of the Young Volunteers wood collection service; it performed without any issues and certainly carried more than its fair share of the load!

Since then it has also seen regular use on Ways and Works trains, in conjunction with trackside maintenance work.

The construction of the bogie, and its subsequent fitting to a piece of rolling stock have sparked a few minor alterations to the design, mostly around accessing hard-to-get-to fixings which secure parts such as the side bearers in place. We have also improved access to the centre pin to aid in locating it as the car or wagon body is lowered onto the bogie during assembly.