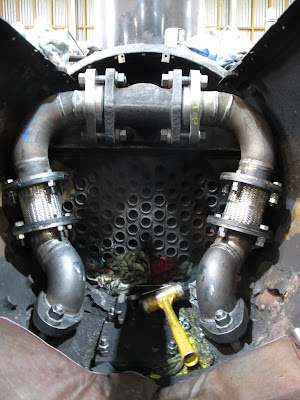 When 14A came into the workshops for its last exam late in 2015, it was noted that one of the lens rings joining the main steam pipe from the header to the cylinder block was leaking. This is a recurring issue with all our Na locomotives due to the lifetime of moisture induced corrosion, and the very reason we went through the process of having new cylinder cast for future fitting. 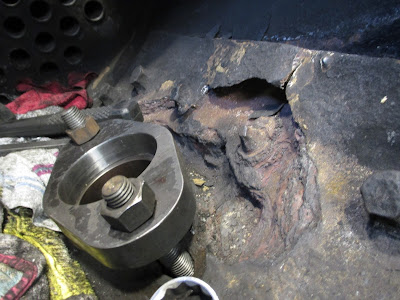 Further investigation revealed that more concrete (used to cover the base of the smokebox) had been added to disguise the leaking lens ring. This in turn had trapped moisture and caused a significant amount of corrosion to the cylinder and smokebox (above) as well as condemning the steam pipes.

As the steam pipes are cast, we set about getting a price for new patterns. This came in at a not insignificant figure, on top of which would be added the cost of actually casting the pipes. 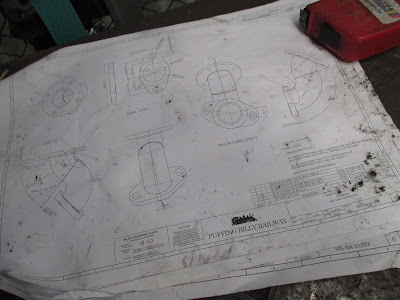 In order to reduce the cost and speed up the repair time, an all-welded version was designed, using standard steel pipe and elbow.

One of the interesting ideas picked up on our tour of North Wales was the use of flexible steam pipes by the Ffestiniog & Welsh Highland Railway for carrying live steam and exhaust steam. These pipes are made from corrugated stainless steel, double braided, and with barrel nipples welded to each end. 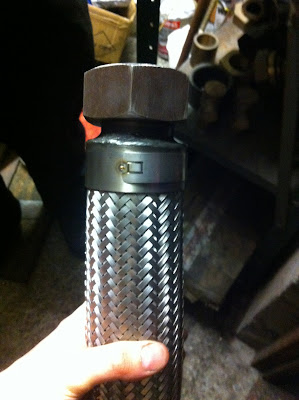 In order to try and reduce the effects of thermal shock on the steam pipes, we decided to try and incorporate these into the new design, in the hope that a reduction in stress would help solve the leaking lens ring issue. 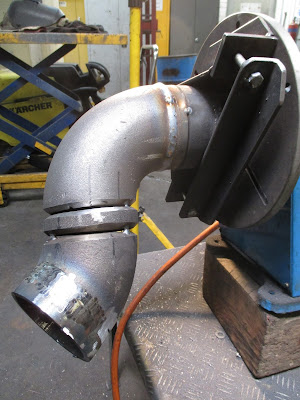 Above, the pipes start to take shape on the welding bench. The pipe is seen mounted to a rotating plate which allows our welder to achieve a consistent quality of weld all the way round the pipe.
The assembly can be seen trial fitted within the smokebox below. The short straight section of pipe lower left is a dummy section used in place of the flexible pipes during the fabrication process. 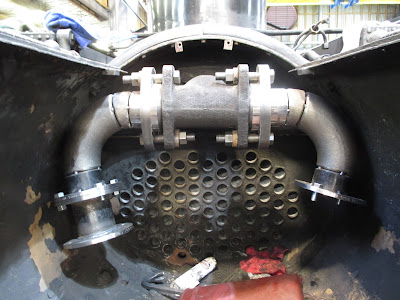 During the process 14A’s smokebox front plate was found to be excessively corroded, and was replaced with the updated design with glass fibre rope as previously trialled on 6A. 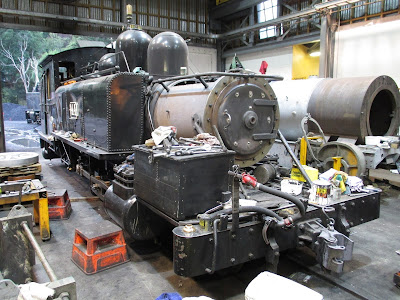 With the fabrication complete and the pipes fitted in place, the two dummy pipe sections were removed to be replaced by the flexible ones. These will be retained for the next time we have to do this job on another engine. 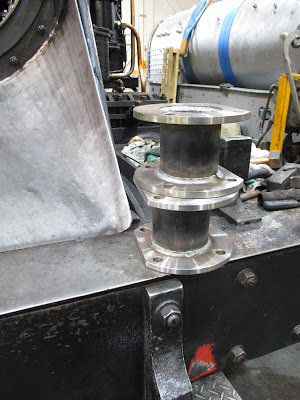 With blast pipe and spark arrestor cage refitted, the job is seen complete and ready to go (below). All that is required now is some rigorous testing to see how the flexible steam pipes perform, and whether the leaking lens ring issue has been solved. 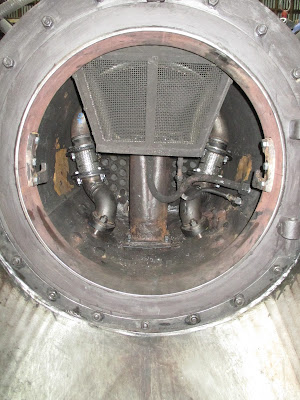